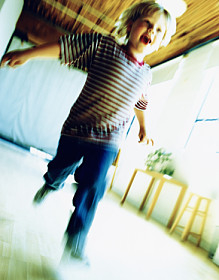 Before you answer, let me explain what I mean.  The overexcitability, or “OE,” that I’m referring to was identified by Kazimierz Dabrowski, a Polish psychologist, who coined the term to refer to the inborn tendency to respond more and more intensely to life’s stimuli.  He believed some individuals are genetically predisposed to have more intense life experiences.  So if your child exhibits one or more of these – more energy than his friends, intense emotional reactions (“drama”), strong reactions to seams in his socks, an extreme thirst for knowledge, and/or a thriving fantasy life, he may have one or more overexcitabilities.  Dabrowski felt that overexcitabilities came in five forms, which are described below.

Psychomotor overexcitability is characterized by a surplus of physical energy.  Rapid speech, intense physical activity, and extreme competitiveness are typically seen.  When feeling stressed or emotionally tense, someone with a psychomotor OE may express these feelings by displaying nervous habits (nail biting or tics), working excessively, or acting impulsively.   As you might guess, kids with this OE can be misdiagnosed as having ADHD (attention deficit hyperactivity disorder).

Individuals with sensual overexcitability have a heightened response to their senses.  Those with fine-tuned sensory systems may find sensory stimuli repellent.  Kids with sensual OE may want earplugs to block out noises, parents to remove tags in their clothes, and may even get sick from an unpleasant smell.  The opposite is true too.  Those with sensual OE may find intense pleasure in music and art.  Emotional tension may be satisfied by overeating, spending sprees, and striving to be the focus of attention.

We’ve all known the child with an imaginary playmate.  In fact, many of us may have had one ourselves when we were young.  However, kids with an imaginational OE take this to an extreme; creating a private world so complex and vivid that they may have trouble distinguishing it from reality.  Individuals with this OE love to daydream and fantasize.  They have a low tolerance for boredom and may use free-play of the imagination to escape it.

Intense curiosity characterizes those with an intellectual overexcitability.  This is the most recognized OE seen in bright, gifted children.  These are the kids who love learning and problem-solving and can spend a great deal of time mulling over a thought or idea.  Those with intellectual OE are avid readers, keen observers, and are highly reflective.  However, they may become impatient when asked to work at a slower pace.  They may be highly critical at times and challenge authority by their questioning.

Individuals with emotional overexcitability are exceptionally sensitive and reactive to feelings and emotions, either positive or negative.  They have the capability for strong attachments to people, places, animals, etc.  However, they can also experience intense fear, anxiety, and depression.  It’s not uncommon for kids with emotional OE to be diagnosed with bipolar or other emotional disorders.

At various times in our lives, most of us have experienced some of the characteristics of the overexcitabilities above.  Researchers believe, however, that overexcitabilities are innate and are present throughout one’s life, rather than being just an occasional occurrence.  Studies show that gifted children, as well as children who excel in one particular subject or who are considered creative, have significantly more overexcitabilities than average, with one OE typically being dominant.

Overexcitabilities can be thought of as various types of intensities.  Although raising a child with any of these OE’s can be challenging, having an OE does not mean a child has a problem or issue.  Here are some suggestions to help you cope: